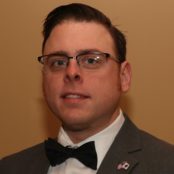 Dustin was raised in Marion Lodge #6 in January 2016 and has held the offices of Senior Steward, Junior & Senior Deacon and Junior & Senior Warden.  He is also a member of El Kahir Shrine, where he serves on the Public Relations Committee.  Recently, Dustin participated in conferring a degree at Grand Lodge with a ritual team comprised of brothers from the first lodges in Iowa.

Dustin graduated from the University of Iowa on the President’s List with a Bachelor of Fine Arts degree in 2013.  During college, he played on the rugby team and was very active in his fraternity.

Also during this time, Dustin served in the Iowa Air National Guard at the 132d Fighter Wing where he worked as an Aircraft Armament Specialist on the F-16C airframe.  In 2011 and 2012, Dustin deployed to Bagram and Kandahar, Afghanistan.

Dustin currently works as a Graphic Artist in Cedar Rapids and lives in North Liberty with his new bride Kathryn and two Golden Retrievers.  In his spare time, you can find Dustin on the lake fishing, riding his bike, or fixing something.

Permanent link to this article: https://marion6.org/dustin-smart/