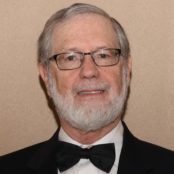 Don is a 50 year Lodge & Scottish Rite Mason having been raised in Crescent Lodge #25.   And, almost a 50 year Shriner.  With the encouragement of Brother Moseley, he became affiliated with Marion #6.  One of Don’s Masonic highlights was being made a Master Mason by his uncles and cousins as well as his father.

Don started his Masonic journey as a DeMolay and was invested with the Chevalier Degree and Representative DeMolay awards.

After serving in the Air Force for 4 years as an MP & Budget Specialist he started on his 40 year career in finance as a banker with the First National Bank of Marion, financial analyst at Rockwell Collins and retired as the Senior Accountant with the Athletic Department at the University of Iowa.  At Rockwell he was on the Board of Directors of the Collins Credit Union for seven years.

Don and his wife, Pat, have been married for 22 years and together for 30.

Permanent link to this article: https://marion6.org/don-boland/