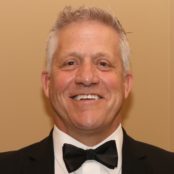 Craig was born in Willmar, Minnesota.  He completed his primary education in Willmar and in 1973 moved to Iowa and graduated from Buena Vista College with a BA Economics.

Craig has been around Masonry since childhood.  His father was a long-time active Mason and Shriner and introduced Craig to the world of Masonry and the Shrine at a young age.  That created a strong interest in pursuing initiation into Masonry and with his father beside him, at the age of 25, Craig petitioned Evening Shade Lodge #312, Spencer, Iowa and was raised to the sublime degree of a Master Mason in November of 1979.  Within a month of being raised at Evening Shade #312, Craig and wife, Kathleen, moved to Benson, Minnesota for new career pursuits.  He attended Lodge in Benson but always stayed a member in good standing at Evening Shade Lodge #312.  While in Minnesota, Craig began seeking further information about the Shrine and in May 1980, walked the burning sands at Abu Bekr Shrine, Sioux City, Iowa.  Again, his father, an active member of the Abu Bekr White Horse Patrol, was at his side.

Craig, his wife Kathleen and two sons, Lucas and Adam, moved to Cedar Rapids in 1996 where he became a sales executive at Rockwell Collins.  Extensive global travel for over 20 years made active participation in Lodge very difficult.  Upon retirement in 2017, Craig renewed his interest in his Masonic journey and demitted his almost 40-year membership at Evening Shade #312 and petitioned for membership in Marion #6, Marion, Iowa.  In May 2018 Craig was approved for membership and has taken a proactive role in the Lodge and has served as Senior Deacon.

Craig enjoys an interest in a wide variety of adventures including golf, hunting, landscaping, woodworking, motorcycle riding, flying and skydiving.  However, his number one interest is spending time with family and most importantly 5 wonderful grandchildren.

Permanent link to this article: https://marion6.org/craig-elliot/