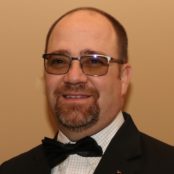 Cliff was introduced to Masonry while living in Utah by his friend Andrew Hall.  He was initiated into Rocky Mountain Lodge #11 in Tooele, Utah, January 14, 2012, passed October 19, 2012, and raised May 25, 2013.  In Utah, new members are required to memorize and recite a catechism in open lodge for each of the three degrees.  This explains why when he first arrived in Iowa, he would, and sometimes still does, revert to his Utah Masonic roots.  Cliff became a 32nd degree Scottish Rite Mason on April 26th, 2014 in the Valley of Salt Lake, Orient of Utah.

Cliff and his family moved to Iowa in January 2015.  Upon arriving in Iowa, Cliff knew he would meet new people who would become new friends and Masonic family.  He found two lodges who were so welcoming, friendly, and had the same Masonic environment experienced in Utah so he joined both.  Benton City Lodge #81 in Shellsburg, July 2015, and Marion Lodge #6 in Marion, September 2015.  Having served as Senior Deacon at his Lodge in Utah, he was asked to serve in the Deacon’s Chairs in both Lodges and became Senior Deacon at Marion and Junior Deacon at Benton City in January 2016.  Cliff said that he was honored to sit in the East as Master of Marion Lodge #6.  Cliff is also the Secretary/Treasurer of the Cedar Rapids High Twelve International #7.

Cliff volunteers with the American Red Cross and deploys to disasters nationwide when able, as well as helps in the local community as needed.  He also volunteers with the Linn-Mar school district assisting with 4th grade reading and the High School Learning Center and assists with the Young Parents Network as needed as a facilitator for the men’s group.

Cliff says, “I believe it is our purpose in life to always strive to make the world around us better.  Our Masonic teachings and the positive influence of the great men around me help me to strive to fulfill that purpose every day.”

Permanent link to this article: https://marion6.org/cliff-haynes/