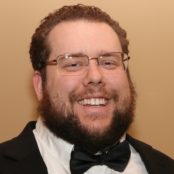 Ever since he learned to read, books have been C.J.’s greatest resource, opening up a world of knowledge that he continues to pursue.  History and philosophy were two topics of great interest to him.  While studying these, he discovered the Masons, and he wanted to know more.  He met Donald E. Mosier, PGM, who told him about DeMolay and encouraged him to join, which he did.  That led to meeting and learning more about Freemasonry from great people, both young and old, from all over Iowa.

As a teenager in the summer of 2009, C.J. petitioned to join Marion Lodge #6 to start the journey to become a Master Mason.  On August 25, 2009, he got his 1st degree on the first day of his senior year in high school.  He received his 2nd degree on September 18, 2009, and the Sublime Degree of Master Mason on Oct 29, 2009, at Marion Lodge #6.  He graduated from Kennedy High School, and then Kirkwood Community College, with an Associates of Applied Science degree in business/marketing.

C.J. continues to promote literacy and learning by volunteering his time at the Hiawatha and Cedar Rapids Public Libraries.  He brought the first Little Free Libraries to Hiawatha and Fairfax.  He donates books to the Iowa Masonic Library, where he is a frequent visitor and supporter.

Working in the telecommunications industry for almost 10 years, he helps customers with internet, phone and cable TV services at a member-owned telecom cooperative where he is a union member of the Communications Workers of America.  An Iowa native, he owns a duplex and rents one unit and lives in the other one.

C.J. is proud to be a Mason because he finds the historic culture and environment intriguing, and believes his brethren reflect the living values of Freemasonry and enrich his life.

Permanent link to this article: http://marion6.org/chris-flynn/